History of the Elbert Hotel

The Samuel Elbert Hotel is the most famous hotel in the 200-year history of Elberton.  The newly renovated Samuel Elbert Hotel has a commanding position on the southwest corner of the public square.  The Samuel Elbert Hotel has a distinctively different appearance from all other buildings on the square because it was built in the non-classical Tudor style.  By ironic circumstance, this hotel, which was named for Samuel Elbert, one of the heroes of the American Revolutionary War against England, was built at the height of the popularity of an English style.  And, it was a building that would have looked perfectly at home in the country from whose dominance General Elbert and his fellow revolutionaries had fought to free America.

The Samuel Elbert Hotel fulfilled the need of a modern hotel in a city that was still growing in the middle of the 1920s.  In January 1924, the Elberton Chamber of Commerce appointed a hotel committee to take action at once in the planning of the modern facility.  This hotel was so sorely needed that various citizens stated their support for the hotel, which had a projected cost of $125,000.  Money was quickly pledged and raised, and even high school students got into the act and expressed their interest in a new hotel.

By August 1924, plans for a modern hotel were underway with the architectural firm of Pringle and Smith of Atlanta chosen to design and build the highly anticipated new hotel.  The Arnold Construction Company was selected as the contracting firm.  R. S. Pringle and Francis P. Smith designed the new hotel in the Tudor Revival style, with half-timber construction and a veneer surface of brick and stucco.  The new hotel formally opened on Friday, August 28, 1925, with an evening banquet which lasted several hours.

The hotel has been sold many times and renamed, but the locals have always referred to it as the Samuel Elbert Hotel long after it ceased being a hotel.  In the 1960s, the building was converted to office space that later had retail space on the first floor.  Although the interior was reconfigured over time, the exterior remained unchanged.  The building eventually closed in the year 2000 and remained vacant for 15 years.

In 2012, the City of Elberton acquired the building and the adjacent parking lot.  Plans began in late 2013 to develop a new use for the important downtown landmark.  Although several uses for the property were explored including residential, office and retail, or multi-purpose use, it was quickly determined that the highest and best use was to return the building to a full-service hotel once again.  Interestingly enough, the same needs in the 1920s for a modern hotel with up-to-date features once again is the driving force in the early 21st century in Elberton for new lodging opportunities for leisure and business travelers.

The City of Elberton engaged the architectural firm of Office of Design of Decatur, Georgia to remake the Samuel Elbert into a modern Hotel.  Many original features were maintained including the exterior, the original windows and doors, much of the wood trim on the first floor, and the original two-toned terrazzo floors and imposing stone fireplace.  The general contractor for the $5 million renovation project was the CloverLeaf of Athens, Ga.  The Downtown Development Authority of Elberton owns and operates the Elbert Hotel to further its mission to revitalize downtown Elberton.

The Samuel Elbert Hotel features 27 attractive guest rooms and suites, a full-service restaurant and bar, meeting space, and a large patio was added on the rear of the building.  The Hotel opened in 2017. 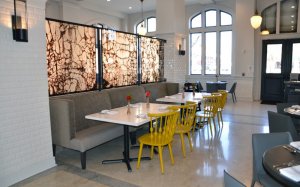 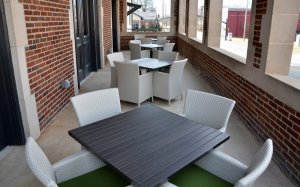 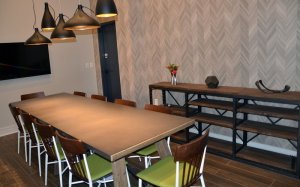 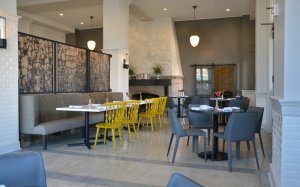 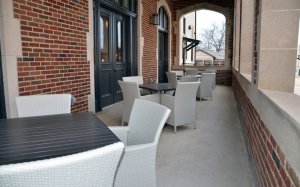 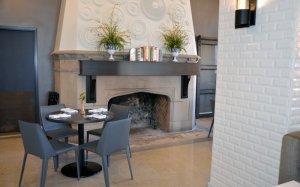 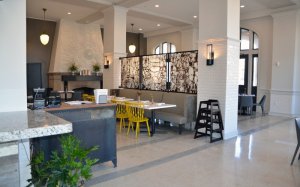 With lovely views from almost every window, the Samuel Elbert Hotel combines the character of a historic property with the technology and conveniences of today.  The luxurious 27-room getaway accommodates meetings and events, perfect for retreats or family gatherings.  Guest rooms and suites are situated on three floors.  Each room has its own unique character and charm enhanced by the appealing city views through the original windows of 1925.